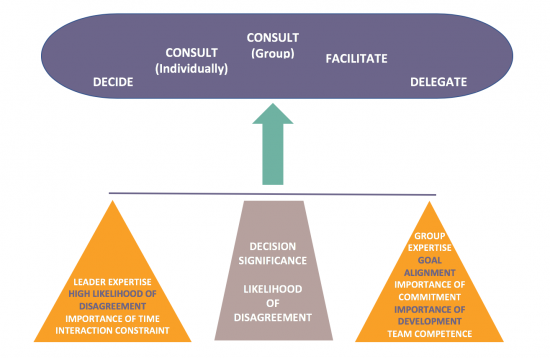 In the face of digital disruption and generational change, deciding how much to involve others in the decisions you need to make as a leader and manager is more relevant now than ever.

Advances in technology – particularly AI – mean that many decisions previously made by managers are no longer required. Further, the millennial generation is demanding more autonomy on the one hand “I’ll make my own decisions” and more involvement on the other “I expect to be consulted on issues that affect me”. It’s a difficult balance to strike.

How much involvement is the right amount?

Given these shifts in technology and workforce expectations, how should you approach the involvement of others in decisions? When should you:

One potential solution is to use simulations to build manager’s awareness of the default processes and biases they use when making decisions. Fortunately, a number of tools have been developed including my favourite by Professor Emeritus Victor Vroom of Yale University.

Vroom’s research conducted with thousands of managers and senior executives over more than four decades provides deep insight into the key considerations of when/when not to involve others. Victor has developed a ten-step process where variables such as decision significance, commitment, expertise and employee development are factored in.

Biases that need to change

I’ve used Victor’s Decision Making for Leaders (DMFL) tool with hundreds of managers and MBA students and have several observations.

The most important benefit I’ve seen for the managers who’ve been through the DMFL tool process is heightened awareness of their default approach and one or two things they need to bear in mind when making decisions in future. By using the decision trees models Vroom has developed for both time sensitive and people development scenarios, managers can check whether they should use decide, consult, facilitate or delegate PRIOR to making a decision on an issue that isn’t clear cut. Conversely, leaders can use the models AFTER they’ve made a decision as support that they’ve made the right choice – or give them pause for thought when their choice doesn’t fit the model.

One final word….’Perfection’ is not the objective

There may be no perfect answer when it comes to making decisions – only time will tell you if you have made the right one. But the combination of managers increasing their self-awareness and going through a process of self-reflection will help them self-regulate to make better decisions more often – and employees everywhere will be happier and more productive as a result.