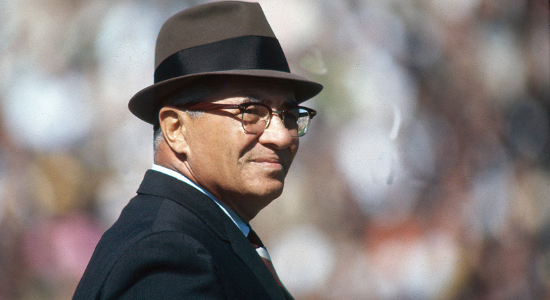 When I was growing up in Canada in the 60’s, the Green Bay Packers were the dominant NFL team.

Their coach was Vince Lombardi. His success and untimely early death have been immortalized on the annual Super Bowl trophy bearing his name. Generally acknowledged as the greatest NFL coach of all time, his REAL genius was understanding human motivation and behavior.

Lombardi is famously remembered for his quote “Winning isn’t everything: it’s the only thing”. However his ability to capture the essence of leadership, teamwork and the value of persistence was prescient and really quite remarkable for the time. Here’s a snapshot:

“The price of success is hard work, dedication to the job at hand, and the determination that whether we win or lose, we have applied the best of ourselves to the task at hand.”

“Individual commitment to a group effort – that is what makes a team work, a company work, a society work, a civilization work.”

“The achievements of an organization are the results of the combined effort of each individual.”

“The greatest accomplishment is not in never falling, but in rising again after you fall.”

“Practice does not make perfect. Only perfect practice makes perfect.”

These quotes demonstrate Lombardi’s crystal-clear understanding of the nexus between determination, group effort, achievement, persistence and practice. Indeed, Lombardi’s words resonate deeply with my own experience with the crucial role that self-efficacy beliefs play in human motivation and behaviour. He didn’t have the theory but he sure knew how it worked in practice!

Lombardi was also way ahead of his time with respect to racial discrimination and gay rights. He had a zero-tolerance policy towards racism and in 1960 – BEFORE the civil rights movement gained momentum, he instituted a policy that the Packers would only lodge in places that accepted all players. In light of the current controversy pitting players of conscience against POTUS, I have no doubt what Lombardi would say or do if he was still alive.

Less well known perhaps was Lombardi’s steadfast support for the gay community and insistence on unconditional respect for everyone in his organisation. Decades BEFORE gay rights were commonly acknowledged, Lombardi would terminate a coach or player who insulted a gay player or front office staff member. As his younger brother’s lifelong partner Hal states “Vin was always fair in how he treated everybody …… he just wanted you to do the job.”

I can only surmise/hope that Lombardi’s zero-tolerance policy and unconditional respect for everyone in an organization would have extended to gender equality – the other pressing issue in organizations and society today. For leaders and managers everywhere, Lombardi’s practical wisdom shines a guiding light on how to be the best you can be.